You are here: Home / Skill / How to Add Humor To A Speech

Joining Toastmasters was supposed to help me transition from stand-up comedy to corporate speaking and becoming a professional humorous, motivational speaker. But, the last two years I failed to reach the final round of the Humorous Speech contest.

I was sick of it but willing to give it one last shot!

And then I did what I should have done at the very beginning. I looked at the judges ballot to see what the scoring criteria was. That exercise and review of the criteria set in motion the creation of the process (now called The Laugh Generator Process) I used to finally advance past the Division contest to become the District Humorous Speaking Champion.

I combined techniques from speech writing, stand-up and comedy writing, along with improv comedy. And… 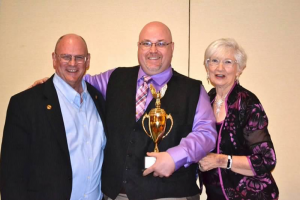 My third time competing in the Humorous Speech Contest, I won. My idea worked, the process worked and…

Sure it worked for me but I was “naturally funny” so I needed to know if it would work for others. And I found the ideal candidate . . . Peter.

“Get your facts first, then you can distort them as you please.” – Mark Twain

Step 1: Obtain a basic understanding of how humor works.

Getting laughs and being funny does require an understanding of humor. So, read Humor Simplified and Demystified. Even if you have already read it, read it again. This is the first step.

Step two is to start with a line from your speech. I prefer to start from a transcript of the speech because that is the easiest. But, if you are just starting to write your speech, that works too. Once your speech is written or you have the transcript, you are ready for step 2.

Step 3: Isolate each fact, sentence or a complete thought, and ask yourself.

In step three we are going to inspect each line of your speech and identify the following.

Step 4: Is there an opportunity to Twist with:

And, just to make sure you have the best laugh, try to create 10 possible laugh lines. Don’t judge yourself, just allow the creative process to happen.

Step 6: Give your speech with the new jokes.

That is it. The simple steps to more laughs using The Laugh Generator Process.

The Laugh GeneratorTM Process in action

Here are two real life examples of how The Laugh GeneratorTM Process could have been used to get some laughs.

A coaching client of mine missed a perfect opportunity to get a laugh in a presentation. He was sharing the story of a boat trip and anchoring his boat during a bad storm. During the story he said “I didn’t want my boat to end up on the rocks.”

What does “on the rocks” also mean? It’s a way to order a drink.

If he had taken a second and recognized the other meaning he could have made the audience laugh by adding “I didn’t want my boat to end up on the rocks; because, boat on the rocks bad, scotch on the rocks good.”

The audience would have laughed at the surprise of that phrase being twisted and having two meanings.

He could have really heightened it this way, “I didn’t want my boat to end up on the rocks, so I did what any captain would do…I went to the liquor cabinet. Because, boat on the rocks bad, scotch on the rocks good.”

At this point, if you have travelled lately you understand extra security measures and searches.

So you know the implied and expected meaning or reaction is one of anxiety and having to be searched. If she would have twisted the meaning and said “all I could think was…Whew, finally some alone time.” Her audience would have laughed.

She could have heightened it even more by using a compare and contrast this way:

That is The Laugh Generator Process. Embrace it, practice it, and you’ll be a funnier you.