You are here: Home / Archives for Rick

This is how she described it:

“Nervousness is too mild a word to describe how I felt. More like … Gutted with trepidation. Bolts of fear. Electric Anxiety.”

She tried everything to overcome it including meditation, mantras, and the power pose. Plus, she used emotional freedom technique (EFT), breathing exercises, and bioresonance sound work the morning of the presentation.

Did the nerves ever go away?

“… the moment her nervousness went away during her Ted Talk was when the audience erupted with laughter.”

In his book “Ted Talks,” author Chris Anderson shares the tale of Monica Lewinsky’s road to present on the Ted stage. She received a standing ovation and her talk has since been viewed over 8 million times.

When you watch her talk, The Price of Shame, the first laughs come before the one minute mark. But, the stress busting laugh happens at the one minute, twenty-two second mark.

And, that laugh lasts for over seven seconds.

Hearing that laughter from the audience meant one thing. It meant she was accepted by the audience and that acceptance allowed her to relax.  According to neuroscientist and laughter researcher Sophie Scott:

“Laughter is the strongest bond builder there is between humans.”

The bond-building nature of humor isn’t new though. Gene Perret in How to Hold Your Audience with Humor shares this Bob Hope quote:

Humor is the welcome mat between the speaker and the audience. A short joke, a quick laugh, breaks the ice between you and that sea of strangers. When they laugh, they are immediately on your side. The laughter makes them your friends.

P.S. After that anxiety busting laugh, Monica executes an expert move to get the most out of that one laugh. The result is more laughs and a round of applause. More about that move in the next post.

P.P.S. Interested in learning how to intentionally generate laughs in your speeches and presentations? Check out the A Funnier You Academy. 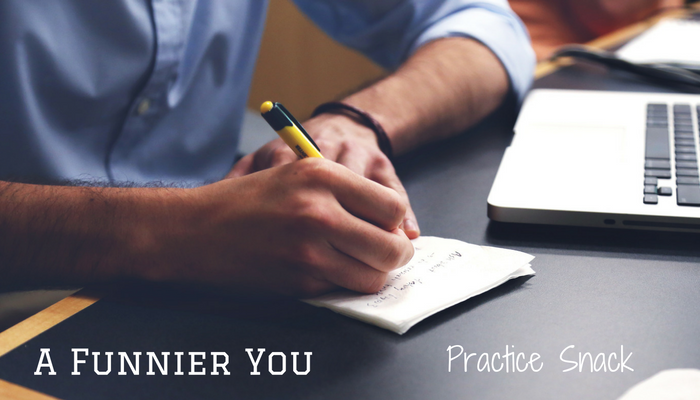 Today’s practice snack is taking us to the movies.

“Life was like a box of chocolates. You never know what you are going to get.”

Have fun and come up with 10 alternate endings in place of “you never know what you’re going to get.” To get started, create two association lists; one for LIFE and one for BOX OF CHOCOLATES.

Today’s practice snack promises to be a lot of fun. Will it? That’s up to you.

Have fun and come up with 10 ways you know Grandma is a biker. We have two ideas (grandma and biker) colliding so start by making two association lists; one about Grandma and one about Bikers.

As promised, here are some of my lines. ****SPOILER ALERT***** if you haven’t already tried yesterday’s practice, don’t scroll, give it a try first.

It’s like E.F. Hutton except when I talk, people:

Today is National Beverage Day as reported by NationalDayCalendar.com

National Beverage Day is observed annually on May 6.  This is a day to sit back, relax and enjoy your favorite beverage.

It may be hot, cold, blended, shaken, alcoholic, non-alcoholic, sweet, sour, smooth, dry, freshly squeezed, frozen or any other type.  The possibilities are endless! Everyone gets to celebrate their favorite beverage today!  If your beverage contains alcohol, remember to drink sensibly.

So for today’s practice snack, pick one of the options below, have fun and go for 10!

Regardless of which topic you choose, the best way to start is by making a word association list about beverages and another about Pickup Lines, Bad Places, or Men/Women. Once you have two long lists, the practice snack nearly completes itself.

As promised, here are some of my lines. ****SPOILER ALERT***** if you haven’t already tried yesterday’s practice, don’t scroll, give it a try first.

Before I share some of my lines, the quote that created today’s practice snack: “The truth will set you free, but first it will make you miserable.” James A. Garfield

Alright, on with today’s practice snack. Years ago there was a series of commercials for E.F. Hutton. And when E.F. Hutton talked, people listen.

Who do you want in the first blank? Your mother? Your Boss? Your spouse? Significant other?